Things I have learned.

Here are things I have learned that might help fellow (future) travelers. Fair warning, I'm no journalist. These most certainly are opinions. More to come.

1. No one wears sunglasses 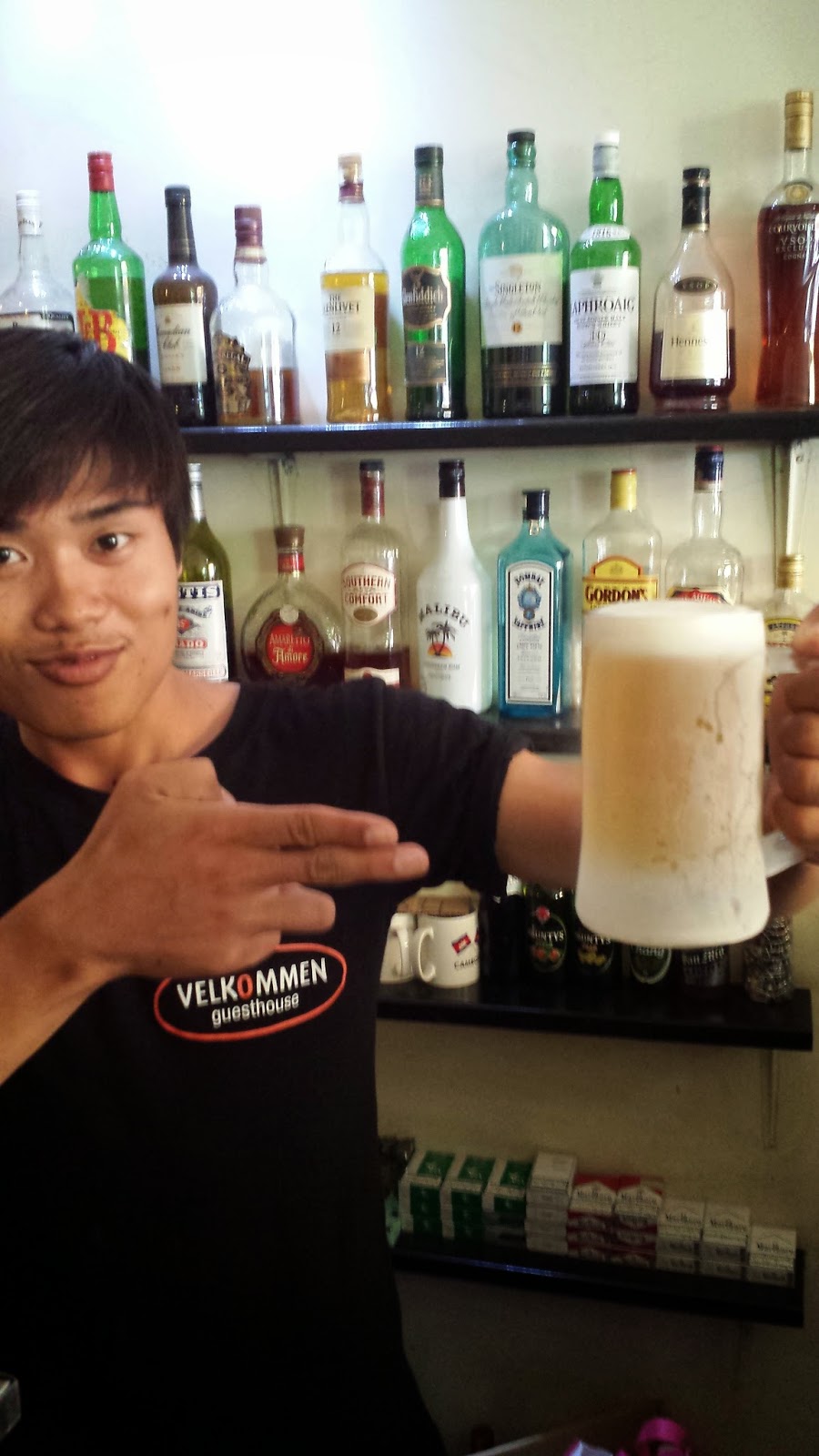 Seriously, no one ever, ever wears sunglasses of any kind. Ever. In Siem Reap, I may have seen two or three people with them, but they obviously were tourists, and of course they were sporting the biggest, douchiest aviator glasses money can buy. It was strange at first. With the sun seemingly always beating down and the roads being super dusty, why wouldn't everyone have sunglasses? Many wear masks already while driving. Two reasons, one being my own hypothesis: sunglasses make it much too dark. Roads, as I've mentioned, are crazy here and require your full attention. The world is much brighter here, from the colors people wear to the houses to everything, and sunglasses would dim that to an unsafe level. Oftentimes in the states, I take my sunglasses off while driving because it seems more dangerous than beneficial. But I got a much more intelligent answer when I asked my new bar hopping friend Rattamah (pictured), who works at my guesthouse, the reason why this is. He says that people here associate sunglasses with movie stars. People here, he says, will laugh at you if you wear them. They don't look at them as protecting your eyes from the sun. They look at them as a ridiculous status symbol. Interesting, right? Correct? I have no idea.

(Edit - Another hypothesis: It could also be that the average salary per year for a person here is $750 and every dollar must be spent efficiently and carefully).

2. Street food is seriously the best
Oh, if only Linda from the travel clinic could see me now! She would scold me for days regarding all the bad worms and sicknesses I'm risking by buying from street vendors. Yes, some stands are much more questionable than others. Others though, are utter goldmines: cheap, good food, with plenty of local flavor. That and you're directly supporting the citizens. Win-win. I haven't gotten sick yet (I'm sure it's only a matter of time, but I like to think I'm invincible) and this is just another reason why all those travel websites are overly paranoid and wrong, written by scared people who don't use common sense. If you're reading this and you travel to a foreign country, get out of your comfort zone and try the local street food. And on that note...

3. You must eat all the strange food you can
Do it. No regrets.

Despite my look in the picture, this WAS AMAZING. Seriously, it was really good. Nothing like it looked. Well worth trying. Be adventurous.

4. Cambodia gets a bad rap
It's no secret that I love this place. A lot. More than I ever thought I would. What's really tough is reading all the negative things spewed about this country. Here's a blog I stumbled upon on recently: http://www.travelingmark.com/country/cambodia/
I actually hate that I'm linking to him and giving him even a single cent of ad revenue (just please don't click on any ads on his site!). This guy made my blood boil. In fact, I haven't been this angry reading something someone wrote in a long while. To have someone so hateful and mean use the power of words to break down cultures like this is sad. Here, read this paragraph from that page:

"Staying true to my purpose, I’m saying it like it is without beating about the bush or taming it down to sound politically correct. To me, sharing full truth is more important than bleeps of the sheep. If you’re heading for South East Asia, bring an MP3 player along and if your baggage space allows, pack up a big set of headphones capable of cancelling outside noises. Actually, pack a few of each as if your itinerary takes you outside of Singapore and Brunei, your MP3 player will soon be stolen off you. It’s never about whether, it’s about when. Sooner or later it’ll be gone and trust me, you don’t want to be among pigs without one."

And people read and follow this guy! Yes, there are negatives about this country, like EVERY country in the world. But while it's good to have constructive criticism, it's much healthier to look at all of what a country has going for it instead. Cambodia has beautiful, caring, and proud citizens. It has a rich musical culture that is making a comeback after being close to being eliminated during the genocide (the KR specifically killed artists or anyone with a creative gene in their body). Cambodia has amazing food and nightlife and temples. They have ancient traditions that haven't been commercialized like the West has done with Easter and Christmas. Their commitment to family should be a model the West could learn a thing or two about. Again, of course there is a lot of negative things to say about this country, but it's much too counterproductive to simply list the bad things about a place. Too often in life, we focus on the negatives and never praise and build upon the positives.

For example, RIGHT after that last sentence, I ended up in a 45 minute conversation with some random couple in this coffee shop. Just a nice exchange of cultural advice, it was great. I can't imagine that happening in the US, as it happens to me every few hours here. I know I wrote about the scammer in my last entry, but again, scammers are everywhere, and the other 99.9% of the population have a heart of gold. Lesson: Don't let others (travel agents, guides, online blogs, and even friends) give you an opinion about a country before you go. Decide for yourself. Find out how amazing a country is without all the noise you hear on the internet.

5. Lizards may or may not get in your bed while you sleep
Try not to let it scare you too much. It will happen.

6. Internet is cheap
For all you United States readers: Capitalism is not good when monopoly's control everything. Because of powerful companies like Comcast, we have some of the highest internet costs in the world yet some of the worst speeds (30th in the world). Even in Cambodia, it's not hard to find families who don't have access to clean drinking water but have internet speeds and smart phone cell service at ridiculously low prices. Here are two great, short articles worth your time:
-http://www.huffingtonpost.com/2012/09/05/internet-speed-united-states-digital-divide_n_1855054.html
-http://www.dailydot.com/politics/us-broadband-speed-cost-infographic/
(Edit - This will only get worse if Comcast and Co. win against the FCC and get "fast-lane" internet)

7. Bars are where it's at
You'll most certainly meet people at tourist spots, but they're a different sort of people. They're usually the ones who drop into a country, see the "good" spots, sleep in their hotel, and take the plane home after the weekend. I'm not saying that's a bad thing (it most certainly is not), but it's just what it is. At the bars is where you find the most interesting people from CEOs to software engineers to guys who have stories about escaping the Congo when it all went to genocidal hell. Sure, there is the occasional person or two that give you the chills, but even they have a story to tell. Granted, as many reading this surely know, I love bars and pubs in the US. I study, read, and socialize at bars. But in the US, we seem to associate bars with drunks and debauchery. But outside the US, the bars are where the world happens and converses. Lesson: go to more bars.

Do the opposite of what people tell you is safe and smart (edit - to a certain extent, of course. Like the man I met last night who was high on meth and going to the gun range to shoot a bazooka at a pumpkin? That, my friends, is maybe letting go a little too much...). Trust me on this.


9. Say hello to everyone and do your best to learn the language
This goes hand-in-hand with number 7. Say hello to everyone! And if they aren't natives, ask them "So, what brings you to _______?" You'll meet the most interesting people life has to offer this way. Also, try to learn some basics of the local language. It goes a long way in communication and it makes everything smoother as you'll get a lot more respect when you try to learn a language instead of insisting they know your foreign tongue instead.
Posted By Nick at 4:17:00 AM
Email ThisBlogThis!Share to TwitterShare to FacebookShare to Pinterest
Labels: Cambodia