One by one by one.

This entry has certainly been a challenge to write and edit, because it has simply been one of the hardest things I've ever written. I said I was going to be an observer and apolitical while abroad. But I simply can't. And to be quite honest, I simply won't. Here's why.

(Note: This isn't like my last entry. You'll find no jokes here. I wanted to make sure that this entry holds back no punches. Most of the following will be hard to stomach, difficult, political, and NOT FUN to read, and will make your blood boil, and for that I'm sorry, but if you're sick to your stomach--blood steaming and scolding--and angry and sad by the end of reading this, then that's good, that's exactly how I hope you will feel).

(Second note: if you're reading this on a cellphone, the format will be strange. I apologize about this). 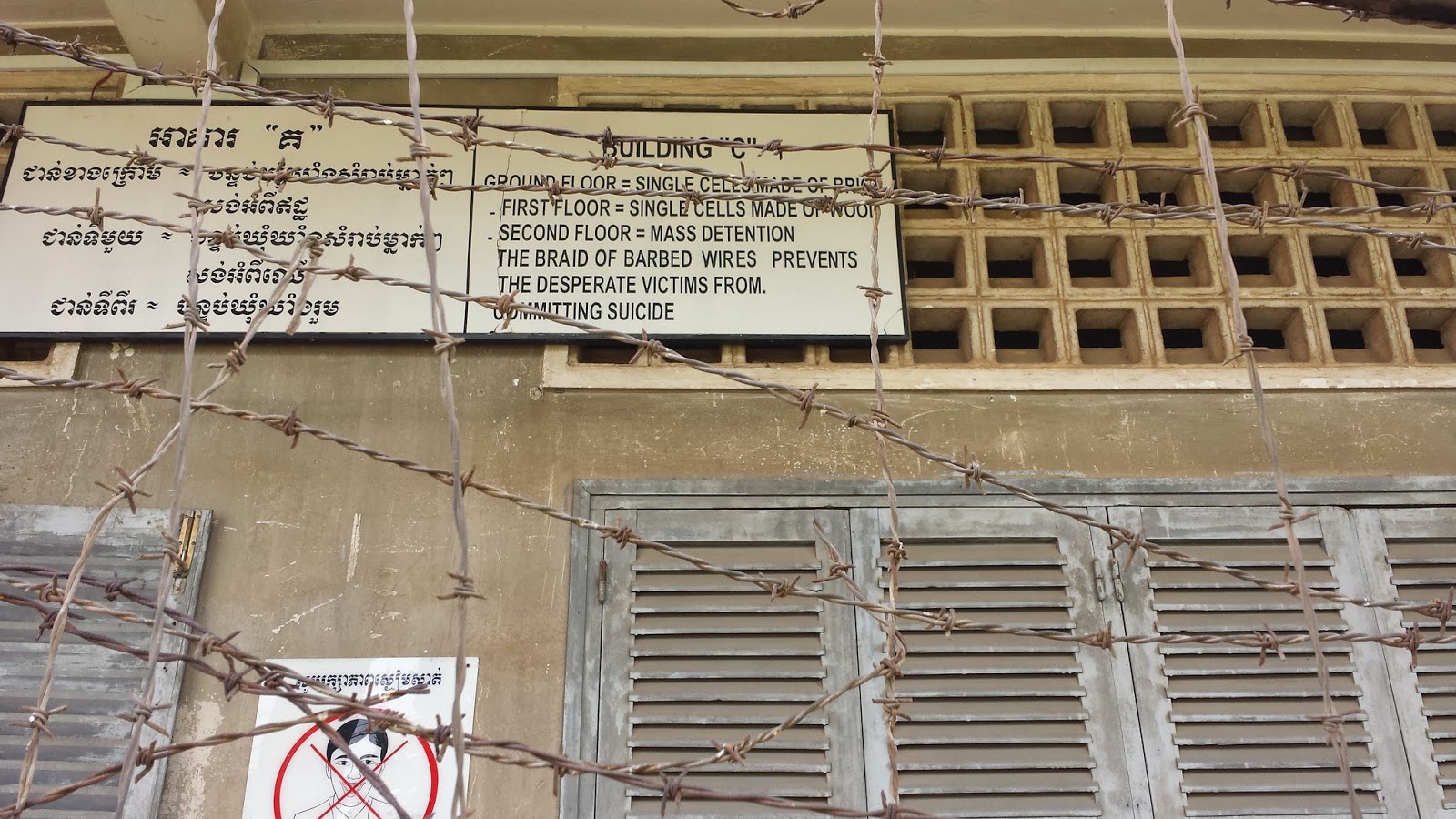 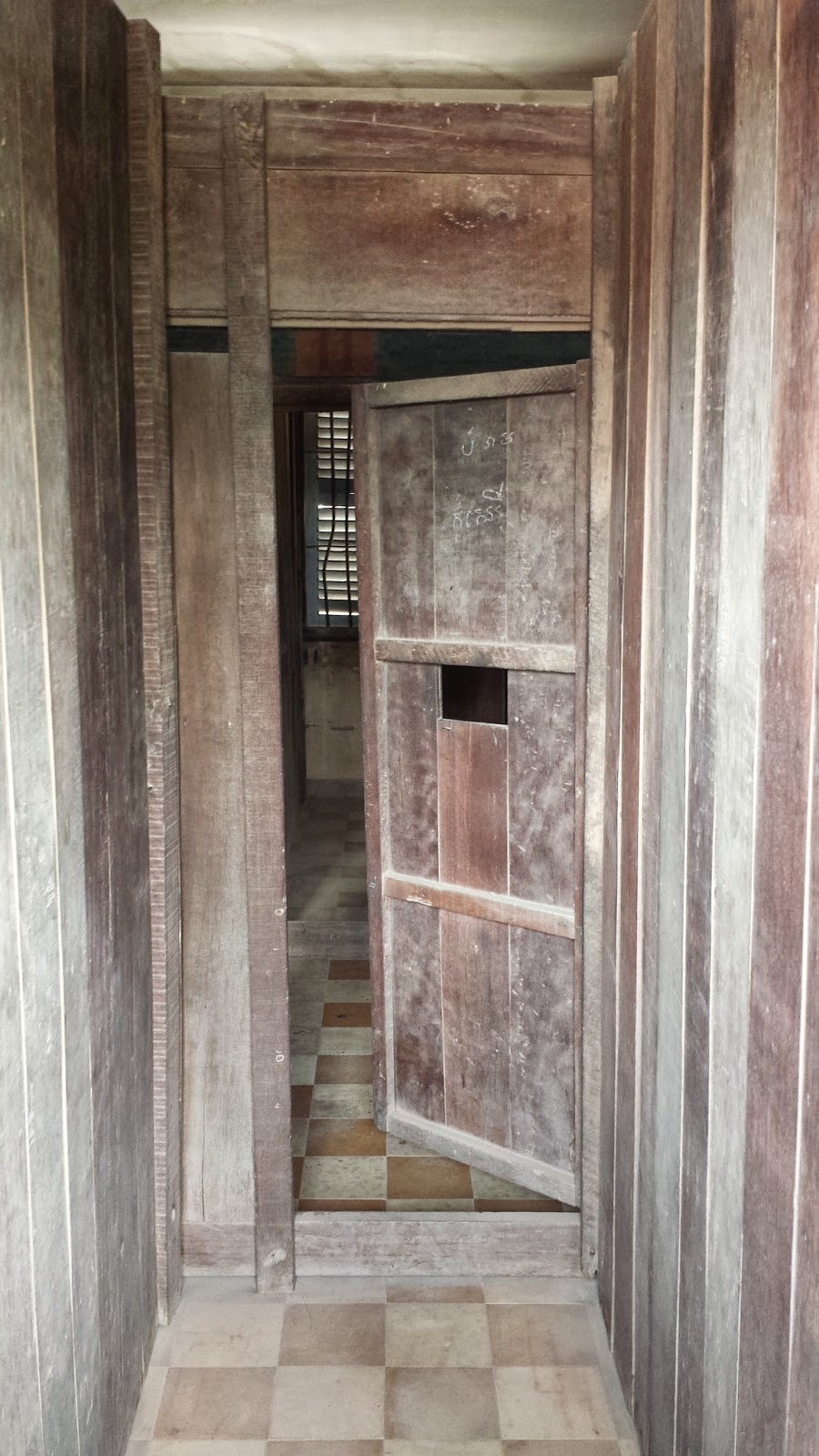 From 1975 to 1979, an estimated 1-3 million people were murdered in Cambodia by an extreme communist regime called The Khmer Rouge (KR). This regime toppled the government and arrested and executed almost everyone suspected of being connected with the former government or with foreign governments. Then they went for the civilians. They spared little (for example, of more than 2,500+ monks in eight monasteries, only 70 were left by 1979). Much like any genocidal government, the KR wanted to create an ideal society and enacted policies that relocated citizens from cities, had them tortured and imprisoned (the picture to right is one the "nicer" cells), carried out mass executions, created forced labor, and killed 1/4 of the entire population of the country. They wanted to, in their words, "wipe the slate clean" and up to 20,000 mass graves, known as the Killing Fields, have been uncovered since then.


Today, I took a trip to one of these "killing fields" (one out of an estimated 300 in the country during that time) and it is exactly what it sounds like. Like the Holocaust, citizen were rounded up because they didn't fit the government-in-power's criteria for those that should survive. Most people who ended up here were also tortured (sometimes for months and months on end) until they either broke and admitted they worked for the CIA/KGB (which they did not, the KR wanted to create some "reason" why they should be slaughtered) or didn't and were outright killed. They were brought to this field, being told they were being located to "new homes". Unfortunately, this was far from the truth. Almost every single person brought here never survived past a single night. They would come, get herded like cattle and systematically killed. A nearby tree held speakers that blared revolutionary music so as to drown out the screams. 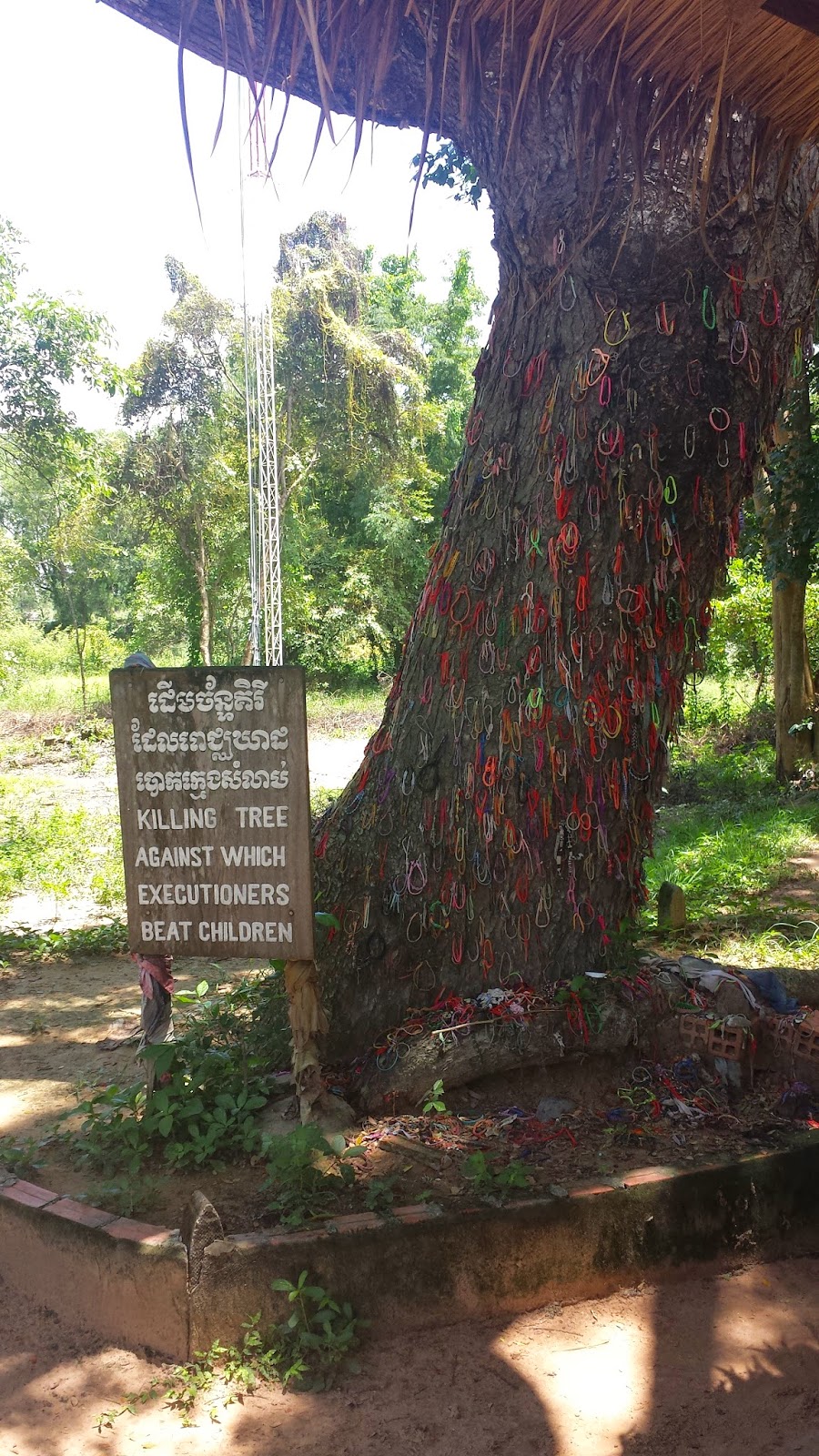 And, today, I stood in front of a mass grave that was specifically made for over a 100 mothers and children. Almost all of them had their heads taken off. In addition, they were beaten to death on the tree nearby (pictured). Or had their heads bashed in by farming tools. Or had their throats slit by sharp tree branches.
If they killed someone in your family, more than likely they'd then kill the entire family in regards to fear of revenge. One by one by one.

They then threw you in a ditch, a mass grave. Sometimes, the people/children they threw in were still holding on to life. With a two birds with one stone mentality, the KR sprayed DEET over these still-alive human beings in order to kill them fully and also to mask the smell of rotting bodies. At first, only 30 people came every two weeks or so to be executed for made-up crimes. By around 1978, it was sometimes 300 people a day arriving. 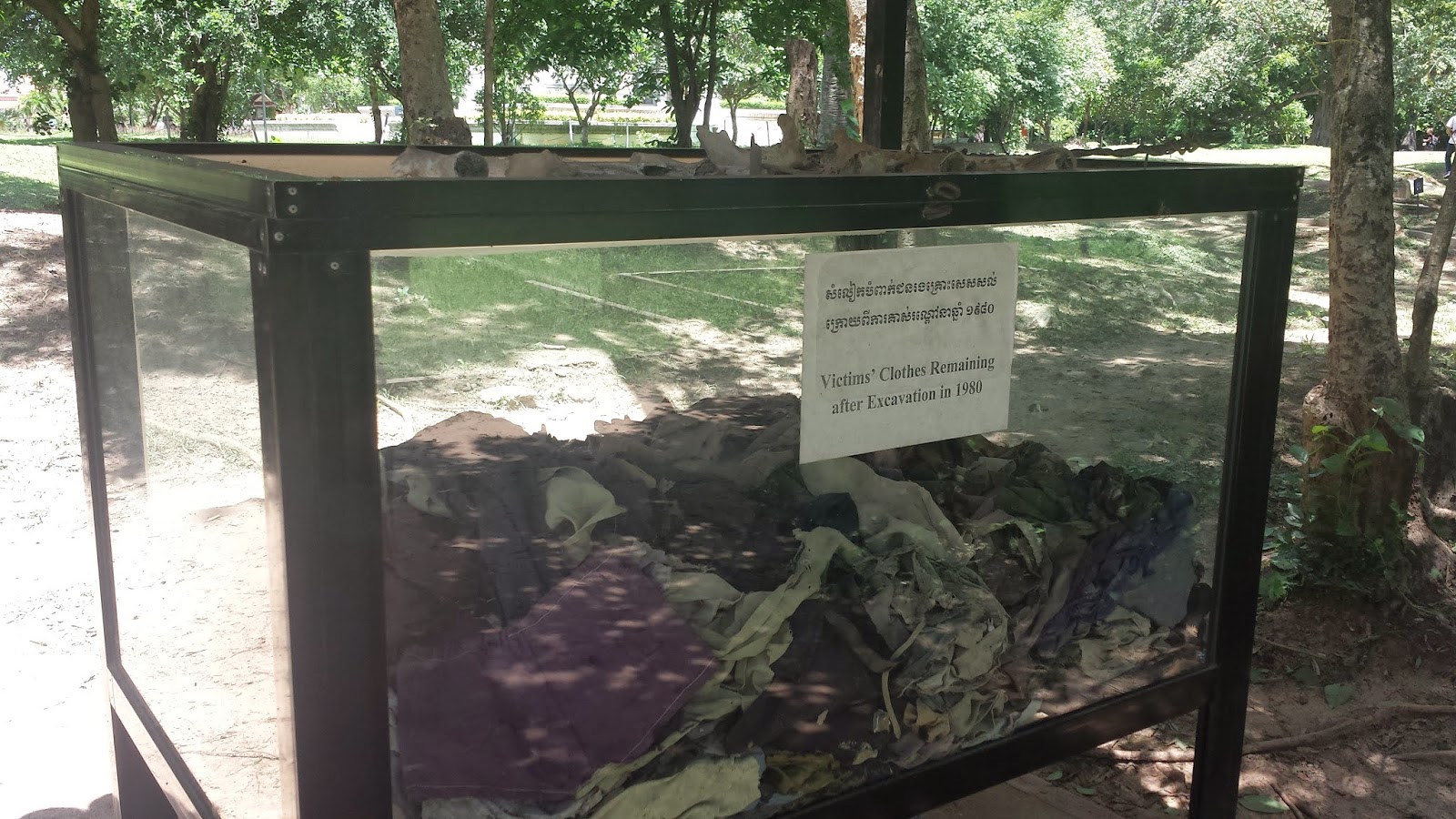 On this sweltering hot afternoon in the middle of Cambodia's rainy season, the waters have brought new bone and cloth to the surface, protruding from the dirt.


If this sounds absolutely like the worst thing you've ever heard, it's because it is.


I felt anger that this went on for so long because 1st world countries at the time (such as the US, Australia, the UK, etc.) did little to nothing to help and acknowledged the top brass of the KR as the legitimate heads of state! Pol Pot and his horrible band of leaders continued to have the privilege of a seat in the UN, even for years after the KR were uprooted. This would get too long winded if we added in all the dynamics (Cambodian bombings, Vietnam War, etc.), so I'll leave it at that. It took almost 20 years before a formal trial was considered and only as recent as LAST MONTH have 2 more of the leaders finally been convicted of genocide and crimes against humanity.

But I have also felt utter amazement that these people are so amazingly resilient. Almost everyone (including my tuk-tuk driver who lost his brother and father) I've talked to lost someone in their family during these 4 years, yet they haven't let bitterness take over. They are some of the most giving, happiest, generous, people I have ever met. They have done their best to rebuild their country despite this unspeakable setback. Mix that in with incredible poverty, and it's amazing they are still standing. But they are. They continue to fight for a living while being ever so humble.

I almost didn't want to type this entry. There's nothing funny to be said here. No way to water it down. But this story needs to be told as many times as possible. It needs to be recognized. We always say that these kind of events remind us what not to ever do in the future. But time and time and time again, this story of genocide repeats (and is repeating right now in multiple countries even as I type this).

But, no, wait, scratch that. I don't actually believe any of that. It's much too cynical and I don't have the heart to ever fully believe we are that far lost. Maybe genocides can be stopped. Maybe there is hope. But first, we must acknowledge a well-intentioned but incorrect fact as myth: It's not enough to simply know that these kind of tragedies happened and are happening. Knowledge is power, sure, but knowledge without application is and always will be useless except to maybe answer some Jeopardy questions.

Too often, I hear things like "America isn't the world's watchdog/world police" or "We have to fix our own problems at home first" or (my personal favorite, ugh) "Let them fight it out themselves/It's not our problem". Really? I mean, really? The people that believe these kind of things have beds to sleep in, families to love, jobs to go to, and a life that isn't comprised of watching your family die one by one, or forced into a prison cell that is a 5 x 10 box simply because you had "soft" hands or could speak more than one language (either of these two things would have had you, and your entire family, slaughtered during the KR regime). To think we can't or won't help is the kind of thinking that is poisonous and inhumane and elitist. Yes, we have problems in the United States that need to be fixed. A lot of them. But if we sit ideally by why babies are getting their throats slit by the hundreds of thousands, something is very wrong here.

Here's a fitting metaphor:
Imagine the world like our local neighborhood. The United States is our house, next door are those crazy Canadians, and each and every house represents another country on this Earth. What we have become is a nation that has not only locked our doors, but dead-bolted them, barricaded them, and we order everything straight to our door from Amazon so we don't have to walk out to our driveway. We have become an isolationist country in regards to aid, but seem totally fine with importing Apple products made in tiny, low-paying warehouses (again, only if it's delivered straight to our door!). Many of us, I would sure hope, that if we heard screams down the street, would do something about it (call 911, grab that shotgun from the closet, etc.) instead of simply going to sleep muttering, "not my problem." Right?

So, I write this entry so that maybe a few reading will do some research, maybe read a bit about this chapter in our shared collective life on this Earth, and tell others. Most of all, I hope, when it happens again, we all do our part to do something about it.

We may live in a somewhat broken democracy, but at least we have a voice. We have power if we accept and utilize it. There is always hope and we are never powerless. There is always a way to fight, no matter how small the pebble in the pond may feel. Every voice, every fist raised, and every comment (social media can be a good thing) given makes a difference (a good example of this is the current FCC battle in the United States that is being fought with simple internet comments!)

Next time you see even a snippet of something like this on the news, or your Twitter feed, please don't ignore it. Share it, tell your neighbor, write to your congressmen and congresswomen. We are not the world police, I agree, but we also cannot be idle in times when unbelievable human suffering is unchecked. We all live this life together and I sure hope we never fully forget this.

Suggested Readings/Viewings:
-First They Killed My Father
(I remember seeing this in Borders when it first came out. It was a title that never left me. Unfortunately, it took years before I finally read it. It's a rough read, but worth your time.

-The Killing Field
(1984 movie that is pretty interesting, I saw this a movie theater in town that plays it every single day).
Posted By Nick at 10:54:00 PM
Email ThisBlogThis!Share to TwitterShare to FacebookShare to Pinterest
Labels: Cambodia